The game’s latest version was 0.7 released back in 2006. It stayed like that so long that everybody – myself included – thought it was an abandoned project. But when I visited the page (out of curiosity) I was redirected to a new domain and noticed that a new version of the game was out!

I’ve written to the developer asking for a change log and if the game has a future release planned, and the answer to both questions was: Nien! (No in German in case you don’t know what that means..)

I’ve decided to write down the changes that I’ve noticed, if any of the readers has a change that I’ve missed please let me know.

In version 0.7 you could swap your soldiers for snow men, which change according to which level you choose to equip. This now is removed from version 0.8 alongside the ability to add custom sprites for your soldiers. 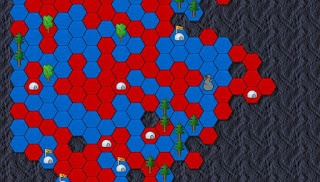 You can choose to play the game either in German or English. Same goes for the website, it’s available in two languages.

3. Story and help are removed in this version

Now you can see the soldiers that didn’t move this turn waving their arms on the map, that helps you tell which ones moved this turn and which ones didn’t. It’s pretty useful actually. 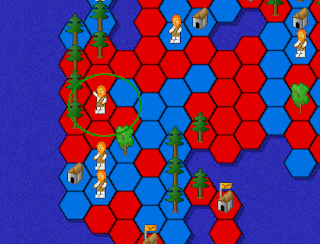 5. Soldiers and map in general look much bigger compared to V 0.7

The map and elements look far bigger in full screen mode than the previous version.
Combined with animations, it makes the game much more playable than version 0.7

The sea looks more “plain” compared to the previous version (can be seen in the screenshots above).

7. The game is packaged as one .exe file

Version 0.7 came in a zip file which had the game itself and files (help and theme packs). This version however is just a single file.

You and the players take turns placing soldiers on the map and taking control over land. You must control enough land to pay for your soldiers or they die (a little dramatic, don’t you think?). The winning player is the one who controls more land.

My impression that this version is still a work in progress. Some menus aren’t displaying correctly and the bilingual option isn’t correct yet. If I were the developer; I’d release an update to patch these bugs.  In all fairness I only tried it using Wine, maybe a native experience would be different.

Also the about dialog looks missing, because it’s actually missing if you compare it to V 0.7

The game is dead!

As per an email I received from the developer saying that the game “is not under active development”.  I wouldn’t expect new versions any time soon.

If you are still interested in playing Wodan – The Trial V 0.7 then it’s tough luck. It’s been removed from the developer’s website and expunged from the web archive! Luckily I still have a copy of it and I’ve uploaded it here for anyone interested.

What do you think of this game? Do you like these niche games? Let me know what you think in the comments section below.

Post Views: 1,570
Categories: downloadEnglish PostGame of the weekturn based strategy