It’s been sometime since I’ve posted a game of the week segment! 10 months to be exact!
This time it’s a game that I found by accident as I was looking for another game and it turned out much better than the one I was looking for!
Are you interested? Let’s get going!
I was looking for a game called Supaplex that was popular on DOS operating system, it’s one of the earliest games I played on PC and enjoyed so much, but playing on Dosbox isn’t very comfortable.

On the other hand, a much better alternative seems to emerge!

The game is called Rocks’n’Diamonds and it’s a mixture of Supaplex, Prince, Dig dug, Bombermaan, chip’s challenge,  and even fixit Felix (I might blog next about bombermaan so stay tuned).

Info about the game

The game is made by Artsoft Entertainment and it has a rich legacy going back to 1995, the version I downloaded was as recent as October 2017 (Version 4.0.1.0).

The game is a puzzle game with increasing difficulty and fast paced gameplay,  the soundtrack is catchy and reminds me of the good old days of Sega mega drive games.

What’s a great game without cheats? This game allows you to play classical games including Supaplex! So I guess it is an alternative for Supaplex after all! All you have to do is point on level sets and hit enter and choose the game you want to play, and in this case it’s supaplex, and several other awesome retro games, feel free to check em out! 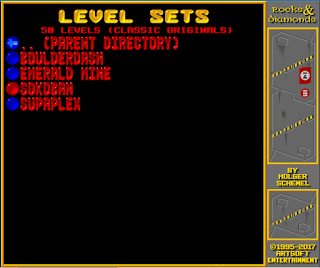 How to add it as a shortcut to plank?

If you are using plank on Ubuntu you know that you can’t add executable files right to the doc, you need to add the icon to the program directory and then add the icon to the dock, here is a really simple way to do it from here.
It’s a tutorial of a different game, but the steps are the same.

What are you waiting for? Download this game and have an awesome time with it!

There is an updated version of the game in this post.