Four months of hard work and fixing bugs have brought us to this highly anticipated release of BlueGriffon 2.0

I have posted about the Alpha and gave it a review and been following the development closely on Twitter, the beta release was just two days before the official release, so it was nearly impossible for me to download, test and finally post about it. Let’s take a look at BlueGriffon 2.0

can be used freely.

It brings the darker theme that was first shown in the alpha version, complete with all functions and menus. 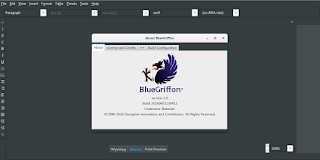 image management is much better than version 1.8 and same goes for tables.

as now I have to do everything by menus!

any random shutdowns of BlueGriffon so far.

BlueGriffon is cross platform and is available to download for:

Windows (Windows 7 and above). And a ZIP file is available too.

Click on any of the links to start downloading from the official server.

Here you can download the available dictionaries for these languages.

A version 2.1 is in the works and the developer is taking note of some fan suggestions like: a hide-able dock and a clear theme, I’m really impressed with the comeback BlueGriffon has made, as I said before it was marked as discontinued by alternativeto.net, it’s really good to have a frequently developed open source HTML editor available! I as a blogger can’t keep up with how fast this application is being developed! And that doesn’t happen often!

Version 2.1 is out and you can check the change list from here!

P.S: The site is inaccessible at times, I couldn’t download it so far, and it wasn’t packed as .deb (  I suggested that several times without hearing back from them).

They aren’t very responsive to e-mails, I’ve been writing to them since the BlueGriffon was frozen at 1.7.2 back in 2013 and they haven’t replied to me once! Even on Twitter I never got to hear back from them, seriously? How hard is it to send a tweet?

I hope you like this post, please give me your thoughts in the comments section below, will you download BlueGriffon? And if you did, what do you think?

Have a nice day!