Today looking at the stats I noticed that I reached 250,000 views! It’s not like it came as a surprise, I was watching these closely and anticipating the milestone, now that we are here, it’s time to talk about it! 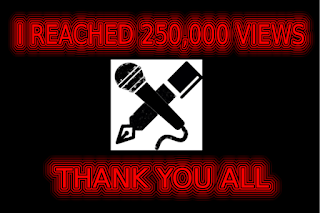 The blog has reached 250,000 not because of my writing skills and people’s general interest in my writings, it reached it because I wrote about the things that people would search for (Libyan people to be specific), things like: How to speed up your Wimax, fixing your generator at home, and the crown jewel of course the passports post. The people come in because the search engine brought them here and then leave without commenting or sharing the posts, I have detailed stats so I could tell!

Reaching this point in blogging doesn’t make me feel good about myself, it became almost irrelevant because I’m not making any use out of the blog views increase, what’s 250K or 1 million views in real life terms? I don’t know! Same goes for twitter, I’m almost at 25 thousand followers, it’s like I’m a millionaire in Monopoly money!

Lately I’ve leaned on the Arabic posts a bit too much and haven’t posted an English update in some time, it’s a bilingual issue that I have to live with, and in order to make it up to my English speaking readers I will sum up the last three or four Arabic posts in this update!

I said that I’m trying to adapt a more positive outlook on life, despite the ongoing war in Libya, and that I need to take a day off each week so I don’t burn out, and that I’m over thinking about the lack of money despite I have two jobs! Also I want to study post graduate but I couldn’t get accepted into any pre-master courses due to the fact I have a higher diploma and not a bachelors degree.

I’ve also said that I enjoyed connecting the phone and the computer using a technology called KDE connect, it provides a wide range of features like remote input and file sharing, and playing with impress remote.

That seems to be the jest of the posts.

Work wise I’ve been off these past few weeks but I’m going back to work next week, and I’m not looking forward to that, at all!

I’m pretty sure that no situation could last, the good times and the bad times will pass god willing, in hoping of better times for us and the generations to follow.

One of the things I really liked was a visit to the old steam bath at the old city in Tripoli that dates back to the Ottoman age, the bath was well preserved and the manager was friendly enough to grant us a tour of the place and it’s history, a hidden treasure indeed!

I was proud that I was able to find a bit more about myself via the personality tests I took, but as it turns out I made a wrong decision by favoring one result over the other, these on-line tests aren’t really accurate and they depend on the way you understand and answer the question, in short I’m not the defender personality type ISFJ, I’m the inspector ISTJ.
And if you think the difference is just the F been changed into T, then you need to learn more about cognitive functions!

This was more than just a post saying I reached 250K and thanks, I merged personal updates as well, and thanks for reading!

Please share it on social media and have a nice day.