Introduction to wine on Ubuntu Linux

Wine stands for (Wine Is Not Emulator), and it’s a bunch of Mono libraries used to run windows programs on Linux.
As a Linux user you will cross paths with wine and in this post I’ll be talking about whether is it a good or a bad addition to your system.

If you play games then you will come across wine sooner or later, as we all know that Linux is not a gaming system by default. The last few years saw a rapid growth in Linux games thanks to Steam, and software that eases game installation like Lutris. However it’s far from Linux being a default system for developers and gamers alike. And that where wine comes to play.
You need all the help you can get playing on Linux, if you can have your collection of games running with Wine, that’s a win (no pun intended).

Any beginner taking the first steps in the world of Linux will have to use Wine to ease the transition from MS to Linux. (No! I don’t mean drink the pain away!!) In fact some distributions aimed at beginner users have it installed by default like Zorin.

Many game developers won’t port games to Linux and instead direct users to “Wine” for games to run on Linux. As for older games that are already out there, good luck with those!  The only way to be able to enjoy them on your system is to have Wine installed.

Wine is better than other solutions

Using wine is much safer than having a dual boot setup, if you mess up the installation procedure then it’s good bye files! (Always have a backup and even make an image of your hard drive).

What programs and games Wine runs?

There are thousands of games and programs that run on Linux using Wine, and with every update that list grows more in size. The best way to know is to try of course and see how things work out.

How does it work?

If you have portable programs, just double click them to work. If they require an installation then follow the steps as you would on a MS system. You can remove them later from “Uninstall Wine programs”.

And you can edit several settings from the applet configure wine, including what version of windows does it work like for compatibility. 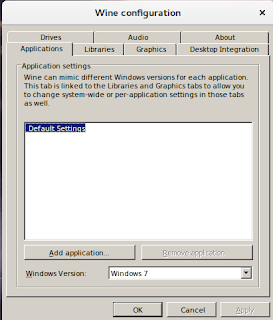 If you already have it, Wine it!

Many free and open source games (I’ve reviewed several on this blog) run on Linux and Windows. So if you have the game for Windows and you have Wine installed, there is no need to download the game again, here wine helps you save some data!

Please refer to the manual on the official website, there are steps that needs to be done in order to get the 32 bit and 64 bit programs to run without an issue on Ubuntu. I recommend using the development branch to get the latest version possible.

Wine is not a perfect solution, it has its flaws like any software, but it came a long way in running your games and software on Linux. Having it run with Lutris really enhances your gaming experience and widens your game options by a whole lot!

Just remember to use with moderation, native is always better.

Do you use Wine on your Linux machine? How is your experience?  Leave a comment below and let me know what do you think?

I wrote an Arabic post a few years ago that roughly mentions wine, take a look at it from here.