Where did the Windows 10 inspiration came from?

Hey there dear readers. How have you been?
Windows 10 seems like an innovated revolutionary system. Where did they come up with all those great ideas? You must be wondering!

Let’s take a look at the facts, shall we?

Check the info-graphic for more detail. 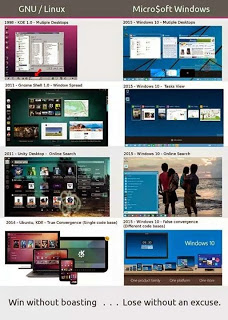 Can we call that stealing? No! That’s not how open source works. What Windows did here was slapping a label on an existing thing and calling it their own, I don’t think it’s stealing or unethical. But the people should know where the ideas originated from and have the right to decide for their own.

Imitation is the sincerest form of flattery, one could say. I mean it took after Linux so much. And as the old saying goes: “If you can’t beat them, join them” with an NT twist, mimic them so much in private and curse them in public. That’s how to make business.

It’s 10 so they break the habit

of names and of course to escape the age old install routine that confuses Windows 9 with Windows 98!

At least Microsoft has it’s own code! While Mac closed the source of Minix (Unix based system) and sold it as Mac OS under the BSD license!!

Big time companies steal ideas all the time and get away with it. The really clever ones like Mac steals then sews who steals from them?! Brilliant!!

Anyway. I’m a bit interested to see how will Windows 10 will fair in the real world. A world ruled and dominated by Microsoft. And by forcing the people to upgrade to it and even giving it free for a while. I think the way is paved!

Have a good day.